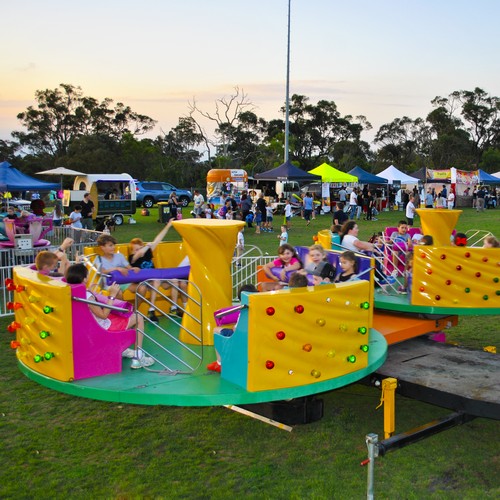 Why one Sydney school went from a large all day fete to a smaller evening event.

Based in Sydney’s North-West this school of around 400 children had a yearly fete that was the highlight of the community calendar. This fete had it all, and was extremely successful for the P&C’s fundraising efforts. But as most P&Cs have experienced, finding volunteers to assist on these days was becoming more and more difficult, and no-one wanted to put their hand up for the head coordinators role.

Then the worst happened – the event was abandoned altogether. When faced with a giant hole in their community calendar the P&C decided to think outside the box and scaled their event planning back so that a core group of 2-4 could easily organise the event alongside jobs, kids, etc. and only a few volunteers were needed on the day.

Looking at how successful this new format was we interviewed Kim Old about their restructuring and how well it has worked for their community.

Our school ran a Spring Fair every year for over 10 years. It was always in August/September, on a Sunday and was an all day event. The P&C had over 10 stalls to man and needed in excess of 100 volunteers to make the day run smoothly. This was on top of 9 months of preparation work by 2 people in a full time capacity. In 2014 there was major issues with volunteer support so we decided to run every 2nd year. In 2016 there was no support for the event so it did not run. In October of 2016 it was decided to run a different kind of event.

2. What was the turning point for deciding to no longer use this format?

The lack of volunteers saw the event stop and then redevelop into a new format.

An evening market on a Friday. There was to be minimal Pa&C stalls (therefore needing minimal volunteers), rides, external stall holders and food vendors. The event had gaps but was a major success. The community spirit was back and the school was happy as there was minimal involvement from them required, other than turning up on the day. We ran the event again in 2018 and again this year. Each year the event changes slightly but the idea the same; Friday nights, 4 hour run time, rides, stalls, food, fireworks. Minimal volunteers from school required.

4. What’s your favourite thing about the new format?

Much more successful and much less reliant on volunteers. Much less organisation in months prior and faster event time, so easier to get it done and dusted.

5. What number of volunteers do you need to run this format?

6. What is you percentage of profit compared to the previous larger fair?

Similar if not more.

7. How did you handle resistance within the community to the change over? Did you get much resistance?

There was some resistance but it came down to having a head coordinator and no one willing to put their hand up. Once this was explained there wasn’t much to resist.

The event can easily be organised by a team of 2 and minimal volunteer support. Unfortunately we are living in a world of time poor parents but they are still keen for community events. Our current format of 50 external stall holders, 3 P&C run stalls, rides and fireworks means much less work for everyone but still develops into an event the kids love and look forward to. It brings the whole community together and that’s what P&C’s are all about.